This weekend or any weekend between now and March 20, 2016 you can get up close and personal with some of the many many models representing the work of architect Frank Gehry. It’s like a wander through some sort of miniature land of the future where nary a right angle exists and buildings are more like super-sized sculptures than buildings. 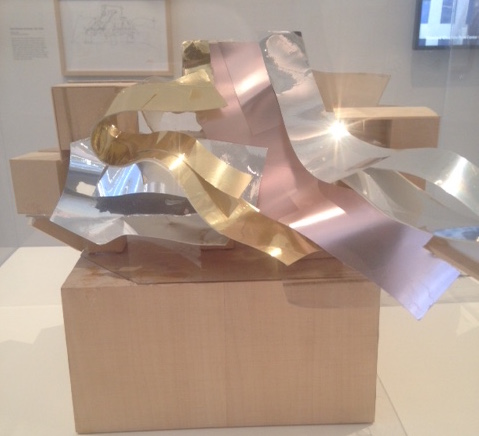 Yes, this is a model of a building, one that actually got built. And what’s nice about the show, videos of the built work accompany many of the models so you can see how it actually came to life, how it scales and relates to a real environment.

Frank’s work is nothing if not stunningly emotional. Arresting even, especially in contrast to our mostly rectilinear world. In fact, i think that juxtaposition is what gives this work it’s power.

At 86 years old, there will only be so many more Frank Gehry buildings to be built. Although there are plenty in the works as evidenced by the show’s room of projects in progress punctuated by an image of the architect’s office — a sea of models:

Whether you are a fan of “object” buildings or not (admittedly some are more successful than others) there is no denying the genius of this man. It is well worth the $25 price of admission to sneak a peek into his world. And most interesting to hear in his own words and those of other creative geniuses across a wide range of disciplines, how and why he does what he does in a captivating film by Sydney Pollack. On the day i went, there were more people crammed into the little corner where this film is projected than viewing the plethora of models that make up the rest of the show. Say what that may about the show as a whole, just go. And then, because we are lucky in LA to be surrounded by a great many of his built works, take a drive around the city and see the buildings in person.

For tickets and more information on the show visit: LACMA.org